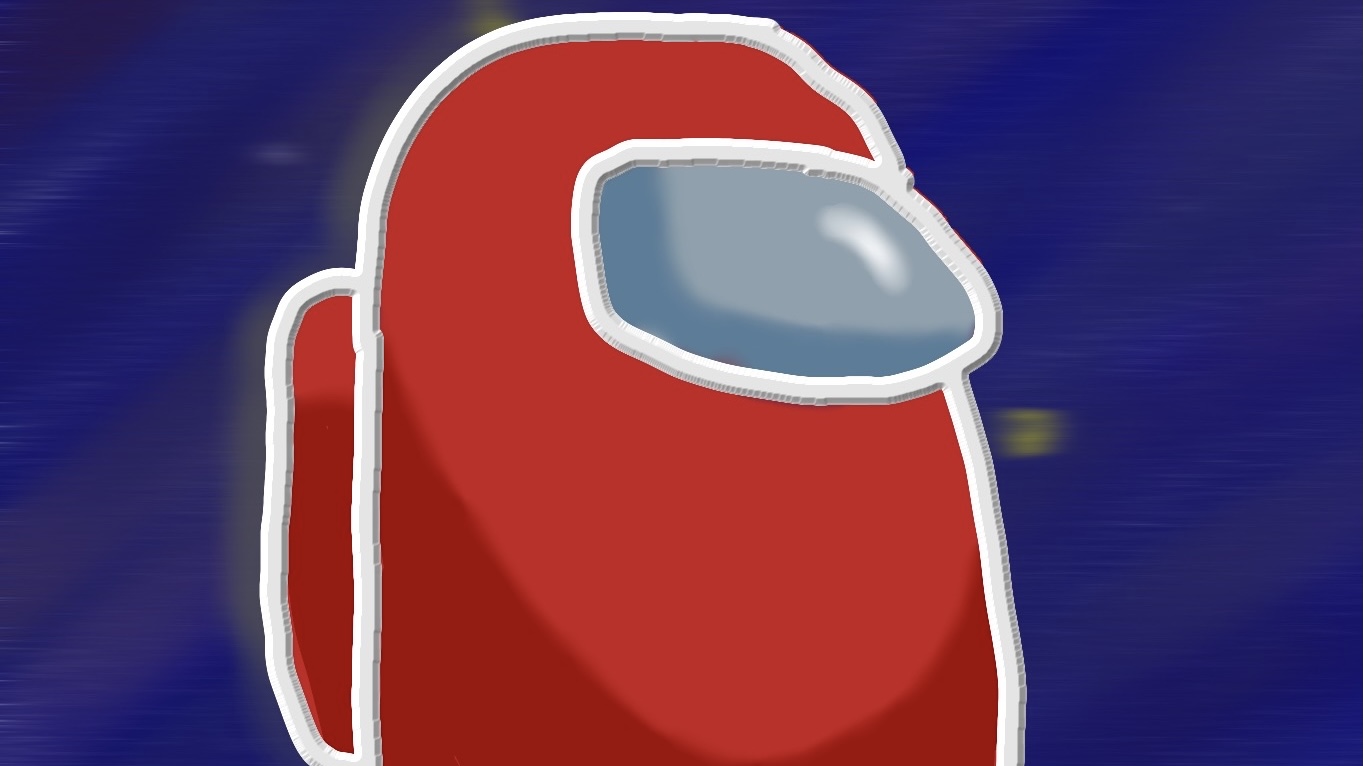 For many teenagers, quarantine has been a string of monotonous months all tied together by one defining factor: boredom. To combat their ennui, teens, if not yet drained from watching Netflix, have filled their at-home days trying new activities. It comes as no surprise that when a multiplayer mystery game called Among Us suddenly skyrocketed in popularity, teenagers would be the first to experience a newfound love for the online game. The unforeseen Among Us craze begs the question: what makes it so popular among teenagers?

Drawing of one of the crewmates, or imposters, in Among Us. Red is just one of the 12 colors that are currently in the game. (MIA ARANDA/ La Plaza art)

For many teenagers, quarantine has been a string of monotonous months all tied together by one defining factor: boredom. To combat their ennui, teens, if not yet drained from watching Netflix, have filled their at-home days trying new activities. It comes as no surprise that when a multiplayer mystery game called Among Us suddenly skyrocketed in popularity, teenagers would be the first to experience a newfound love for the online game. The unforeseen Among Us craze begs the question: what makes it so popular among teenagers?

Among Us is an online murder-mystery game that is only available through download on a computer or other mobile device. The game can take place in one of three space themed settings all of which are composed of a series of rooms with specific corresponding tasks. Each player enters the game as a living entity wearing a different colored spacesuit. Players have the option to express their originality by customizing their character and creating a name that other players will refer to them as during the course of the game. When the needed amount of players join (4-10), the host will start the game and players will randomly be assigned as crewmates or imposters.

Crewmates are accountable for traveling around the map to complete their assigned tasks while imposters, relying on individual strategy and wit, have to blend in with the rest of the crew while simultaneously murdering them. When a body of the deceased is found and reported, everyone is catapulted into a meeting to discuss and identify who killed the body. To the best of their ability, the crewmates investigate the incident while the imposters deny accusations against them and use false evidence to their advantage to prevent themselves from being voted out of the game. Providing both suspense and an adrenaline rush, the game satisfies the appetite for thrill and excitement.

With all that being said people seem to have discovered Among Us around the same time, many wanting to see what all the fuss was about.

Ryan Colunga, a sophomore from Citrus Valley High School, claims “I actually started playing it with friends a few years ago before it recently became popular.”

Other students like Citrus Valley freshmen Questin Hamlet, Aneesa Jara and Leana Vargas say they found out about the game from different social media platforms.

Hamlet says, “This year from Youtube» referring to when he found out about Among Us. Along with many other students, they say that they found out from Tiktok and Youtube.

The game has been released since 2018, but not that many people seemed to know about it. With it being posted on social media, it resurfaced and became popular amongst people of all ages.

Many Redlands students have found pleasure in playing Among Us in their free time–that is, if one enjoys the restless feeling of suspense. For those who are always compelled to try out games with a mix of mystery and strategy, Among Us is a dependable go-to option.

Citrus Valley  junior Erubiel Gaxiola said, «It’s really fun tricking and basically being a parasite among your friends and then them finding out at the end.»

«As the impostor you have to think about what your plan is and when you’re a crewmate you have to use your knowledge to sniff out the impostor,» said Citrus Valley  sophomore Alexander Lemoine.

Among Us may seem like any virtual game in the 21st century, reaching its zenith of popularity before descending down towards irrelevancy. However, for many students, the game is not only a source of entertainment, but it is an outlet in which they can enjoy a well deserved break from their tiring school schedules.

Rosalinda Ramariez, a junior at Redlands East Valley High School, says that the game “gives you a break from other things, especially school right now. It will get you away from stressing over your homework.”

Citrus Valley  freshman Albert Luna said others should play Among Us to “distract yourself from school a bit and have fun.”

The general consensus among highschool students is that the game is a definite remedy for perpetual boredom. Jayden Call, a Citrus Valley freshman, even goes as far to say that “when you are bored, it can save your life.”

Impressively, the game still manages to provide students with a desperately needed aspect of their life: social interaction. The months of continued isolation and distance learning have left highschool students yearning for quality time with their friends and the feelings that come with it. To an extent, Among Us gives students the opportunity to connect online and fill a missing void in their life.

The ability to stay in touch with friends with the effortless sending of a game code has led many people to regularly playing this game.

Redlands East Valley junior Ella Fletcher said, «It’s very similar to the games Mafia and Ultimate Werewolf that I was already playing in person, so now with Covid you can still play a similar game and stay safe while doing it.»

“I enjoy playing Among Us, because we can play it with friends and family, and if we want, we could play with random people,» said REV freshman Sarah Reynolds.

Jenna Adair, a Citrus Valley freshman, said that “It also is a great game to play with family or friends, because you all get to laugh together and work together to figure out who the imposter is.”

Among Us welcomes all people to its servers. For students, the game provides an amalgam of heartfelt laughs, joyous experiences, fun challenges and a distraction from everyday life. It brings people together during these unprecedented times and bridges the gap between isolation and distance. The game creates a virtual community where all students can gather together despite their circumstances.

In the words of Lizzy Northcott, a Citrus Valley  freshman, Among Us is the perfect game “to pass time, to meet others and to bond with those you know.”